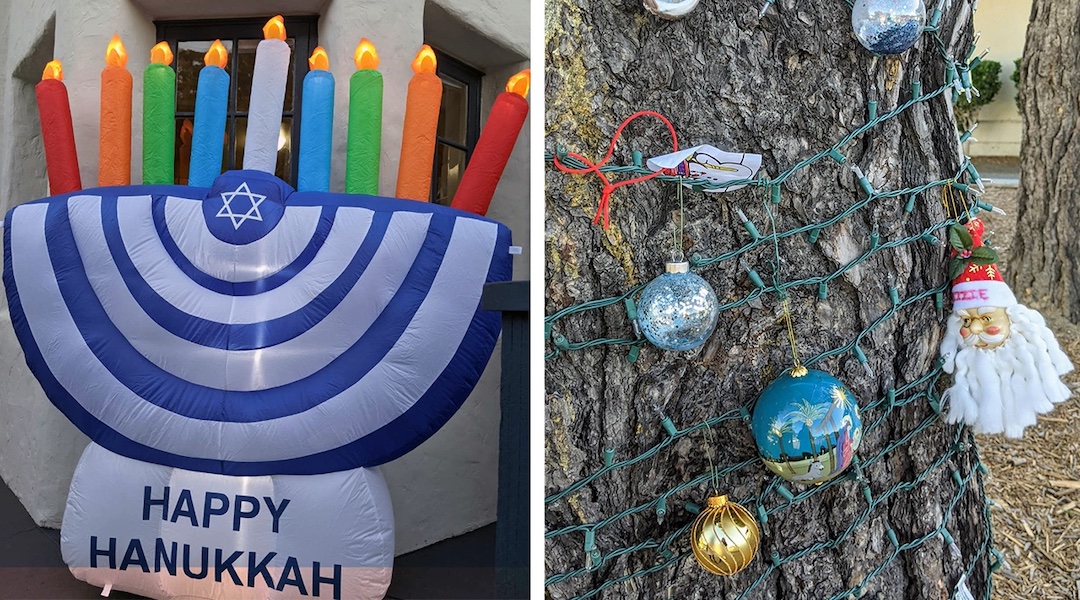 A 6 foot inflatable menorah next to a public school “holiday tree”? A California parent sued to make this happen.

(J. Jewish News from Northern California Going through JTA) – For a time, Shel Lyons scrutinized her children’s public elementary school for what she described as a role model favoring Christianity over other religions.

This year, the Jewish mother discovered what she believed to be clear evidence when an outdoor lighting tree was planned at the school, located in Carmel, California. She asked to bring a giant inflatable menorah to display next to the tree, but the school administration and parent-teacher organization turned down the request.

Three days before the scheduled tree lighting for December 10, Lyons sued them. An attorney, Lyons has filed a lawsuit in the Northern District of California against the school district, Superintendent Ted Knight and Carmel River School Principal Jay Marden, seeking a temporary restraining order that would have required the school to allow the inflatable menorah.

Three days later, Lyons – who has a third-grader at K-5 and is the parent of two of her graduates – voluntarily withdrew the lawsuit, after a judge found she had not meet the “high standards” required for the restraining order.

The dispute has raised decades-old questions about how to properly include students of different faiths in a public primary school, and also reignited a national debate about what it means to show a preference for a specific religion – which is unconstitutional by a public school, in accordance with the establishment clause of the First Amendment.

Carmel River School officials claim that the lighting of the trees was non-religious in nature and intended only to celebrate the holiday season. But Lyon saw the event of December 10 as a non-religiously neutral but Christian affair.

The allegations of “systemic endorsement of Christian beliefs” were “very serious” and “the feelings of exclusion felt by underage children are particularly disturbing,” Judge Beth Labson Freeman wrote in the ruling against a restraining order. But she did not comment on a larger question posed in the Lyon trial: whether the school had shown a tendency to favor Christianity.

The December 10 rally was hosted by the Carmel River School PTA, who requested permission from the administrators to host the event on school property. Although described as tree lighting, the festivities also involved decorating the tree, planted on the school grounds, with ornaments.

Lyons clearly saw the event as a Christmas tree ceremony and said that while Christmas-themed celebrations and symbols are everywhere at school, symbols on other holidays, such as Hanukkah and Kwanzaa , are not.

The school tries to include Hanukkah during the holidays. But when a Hanukkah song was sung at her child’s holiday music show in kindergarten several years ago, Lyons said, it was billed as an “Israeli” song, implying for her that the Christmas carols were simply “American” songs.

“I had to explain to them that we are not Israelis, my daughter does not speak Hebrew,” she said.

Prior to the tree lighting event, the PTA invited school families to bring an item to decorate the tree “that reflects their family, heritage and / or faith”.

Lyons said she and her husband “were shocked at the ignorance and offensive nature of this suggestion.” They did not want to hang anything related to their family’s Judaism on a tree that symbolized a Christian holiday.

Instead, she asked to bring a Hanukkah item – a 6-foot-tall inflatable hanukkiah, or menorah – to display next to the tree.

The PTA and the school refused, saying it did not meet the criteria for an ornament: that the object could fit in a paper lunch bag.

Connect with your community every morning.

“The large inflatables were never used on the school campus as part of the December vacation celebrations,” Marden wrote in a statement filed with the court.

The school said it was offering Lyon the option of displaying its inflatable menorah elsewhere “when the use would not conflict with the planned event.” Lyons said the offer was made after Chanukah had ended, but if it had been made sooner, she would have considered it.

For many Jews, the idea of ​​decorating a tree in December with a Jewish object seems strange, if not unseemly. Rabbi Bruce Greenbaum of the Reformed Carmelite synagogue, the Beth Israel congregation, said he would generally advise against worshipers.

Greenbaum sent his children to Carmel River School and said he called to express his displeasure when he heard about the recent controversy.

“Don’t turn your hanukkiah into a Christmas ornament,” he said. “It is to desecrate the hanukkiah.”

He did not believe the idea that the tree lighting ceremony was unrelated to Christmas, despite the tree being an existing tree on the school grounds.

The Carmel Unified School District did not respond to a request for comment, citing an ongoing litigation.

Legally, Lyons – who had asked the judge to declare Carmel River School’s practices unconstitutional and order school administrators to change course – had to face a tough climb from the start. This is according to Charles Russo, a law professor at the University of Dayton specializing in education law and in 2014 co-author of an article on the legal issues surrounding the celebration of Christmas in public schools.

Russo pointed out that in the Supreme Court case of 1989 County of Alleghany v. American Civil Liberties Union, in which the ACLU sued Pittsburgh County over the display of a menorah, Christmas tree and nativity scene on city property, the court ruled that the Christmas tree “is not in itself a religious symbol”.

“If the school officials didn’t have an explicit Christian symbol,” like a baby Jesus or a manger, he said, “I don’t think so. [the lawsuit] will go too far.

Lyons said she has not ruled out filing a new trial. She also said she had been looking to find a new school for her third grader, but the other elementary school in her district was full. She said she was ultimately appalled by the school’s response to her complaints, whether administrators were protected by law or not.

A version of this article originally appeared in J. Jewish News from Northern California, and is republished with permission.

–
The post office A 6 foot inflatable menorah next to a public school “holiday tree”? A California parent sued to make this happen. appeared first on Jewish Telegraph Agency.