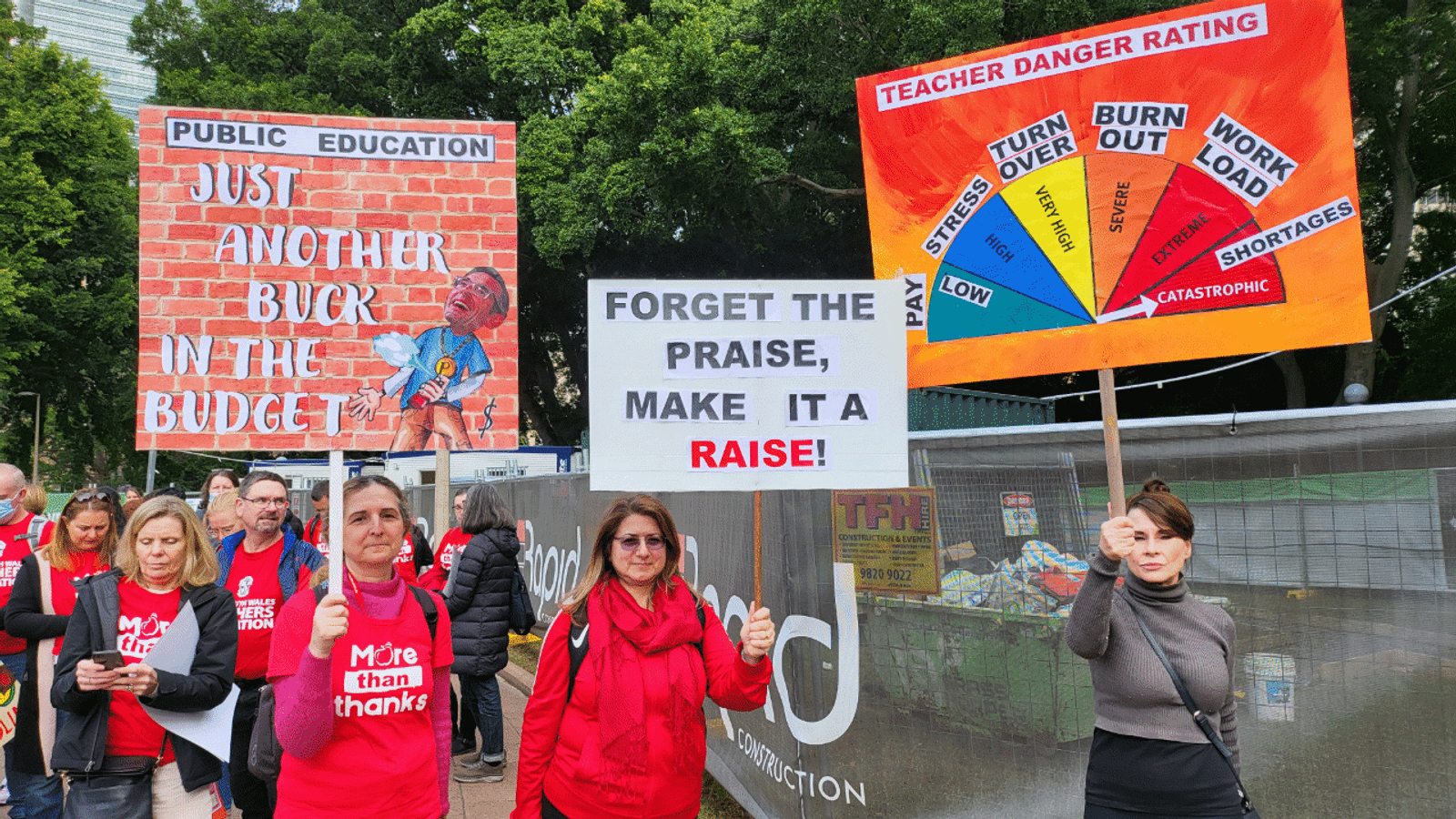 The Labor Court imposed a two-year award covering wages and working conditions from the beginning of 2022 to the end of 2023. The judgment involved a nominal wage increase of 0.25% retroactive to July 1 of this year, on top of the 2.04% previously paid, and an increase of 2.53% for 2023. seen Premier Dominic Perrottet’s state government falsely claim that the pay deal equates to a 6% raise. over two years.

Even this bogus figure is well below the official annual inflation rate of almost 8% which is expected to be reached by the end of the year, not to mention the much higher real cost of living in Sydney and New -South Wales (NSW).

If the IRC decision is upheld, it will mean that the standard of living for public school teachers will be drastically reduced, adding to the terrible working conditions and intolerable workloads that have been engineered by the Labor and Liberal governments. successive.

The NSWTF categorically refuses to organize any action. His union president, Angelo Gavrielatos (annual salary and benefits of $254,000), said after the IRC’s decision: “The March election will be a vital test of which party has a plan to tackle to the real causes of the teacher shortage and securing the teachers we need for the future.

Public school teachers are being told to swallow the pay cut, wait, and then in March 2023 campaign for the Labor Party in the national election. There is in fact no substantive difference between the Labor and Liberal parties on the agenda of slashing public education spending and imposing regressive educational measures in schools. The union bureaucracy’s election campaign highlights its role as an active accomplice of the ruling elite.

In Western Australia and Victoria, Labor state governments have recently worked with teachers’ unions to impose deep cuts in real wages. In Victoria, this involved the Australian Education Union (AEU) which struck a deal to raise nominal annual wages by less than 2% over three years, working with the state Labor government of Prime Minister Daniel Andrews, despite widespread opposition from teachers. At the federal level, Prime Minister Anthony Albanese’s Labor government has maintained its predecessor’s pro-private school funding model while imposing budget cuts across the board and overseeing real wage cuts for workers that are expected to last through less than two years.

The record demonstrates the futility of Labor Party promises in New South Wales to renegotiate the price should it win the state election. Labor is a pro-business party just as much as the Liberals. If Labor forms government next year, it will work to meet the demands of finance capital to reduce state debt and deficits, including by undermining the wages and conditions of public sector workers.

The NSWTF’s capitulation to the IRC’s decision marks the culmination of its year-long systematic sabotage of any effective resistance within schools against the state government’s offensive. In December 2021, when the previous industry deal expired, the NSWTF staged a one-day strike, the state’s first educators in a decade. This was followed by two more one-day shutdowns, in May and June, but each was isolated and separated from industrial campaigns by public hospital nurses, railway workers and other public sector workers.

At every step, the teachers’ union bureaucracy worked to subordinate educators to the anti-worker framework of federal industrial law and the state’s IRC regime. In October, when the IRC sentencing hearing was scheduled, the NSWTF apparatus made clear its surrender to the Perrottet government. He organized a so-called day of action coinciding with the public hearing, which consisted of a brief early morning protest in front of the court, a few hours before the hearing and on teachers’ free time, followed by teachers wearing red clothes at school and posting material to social networks. This was accompanied by public statements from union officials making it clear, firstly, that they hoped an IRC ruling would bring the state government everything it was asking for, and secondly, that nothing would be done. to oppose the degradation of teachers’ salaries and conditions.

In an apparent attempt to cover up the teachers’ widespread anger, the NSWTF did not post anything about the IRC’s decision on its Facebook page, the union’s most used and viewed social media outlet.

The NSWTF also remained silent on two other IRC rulings this year, fining the union a total of $90,000 for the ‘unlawful’ 24-hour strikes in December and May and other limited industrial action. The union, which basically agrees with the anti-strike legislation, and which will use the threat of sanctions as a pretext to end future strikes, accepted these fines without a word to the members in order to suppress any calls by workers to mobilize in opposition. to the labor courts or the government.

The union apparatus also said nothing about an important aspect of Friday’s IRC decision – a change to so-called “performance” review mechanisms. The government has successfully applied for a significant change to the award, with a new clause allowing the Department of Education to “amend the performance and development framework which has been jointly developed by the parties [i.e., the government and the union] and/or replace it with one or more new performance and development policy frameworks, after consultation with the parties.

In its request to the IRC, the government made it clear that this ability to “vary” the performance and development framework aims to adopt more punitive measures of supervision in classrooms and to facilitate the dismissal of teachers deemed “ underperformers”. In its brief, the department complained that under the current framework teachers are allowed to choose a colleague to observe their teaching, rather than the principal who determines it, and that “the lack of feedback documented performance can compromise principals’ ability to undertake performance improvement programs (and their ability to defend performance management processes in unfair dismissal proceedings).

The IRC’s decision came days after a bogus survey was published by the NSW Upper House Education Committee. Namely an investigation into the causes of the state’s teacher shortage, the report amounted to a right-wing rant against the public education system written by Mark Latham of the far-right One Nation party and several government. Latham provocatively said too many teachers had ‘barely passed’ their own high school certificates and were ‘not up to it’, with NSW ‘paying a heavy price for a school industrial system that protects teachers underachieving and inflating generous working conditions at the expense of professional excellence.

Public school teachers and workers must mobilize against the Perrottet government by taking matters into their own hands and forming grassroots committees in every school and community. They must prepare industrial action in defiance of anti-democratic anti-strike mechanisms threatened by the IRC and the Fair Work Commission, with educators turning to other sections of the working class facing similar attacks, especially workers. of the public sector, including TAFE teachers who recently went on strike. action for the first time in a decade, university staff, hospital and health care workers and railway workers.

This is a political struggle, not only against the Perrottet government but against the entire political establishment, and aimed at establishing the basic social right of all young people to a fully funded and universally funded public education system. accessible with decent salaries and conditions for teachers and school staff. .

This perspective is being advanced by the Committee on Public Instruction (CFPE) which is co-sponsoring a major public meeting with the Health Care Workers Rank Committee, “Bringing Educators and Health Workers Together: Opposing the end of protective measures against COVID! Life before profit!” The meeting will be held online on Sunday, November 20 at 3 p.m. (AEDT) – register now!

Get updates and information on the fight against the dangerous reopening of schools.

University of Stirling bans meat and dairy on campus: Students’ union votes to go vegan by 2025