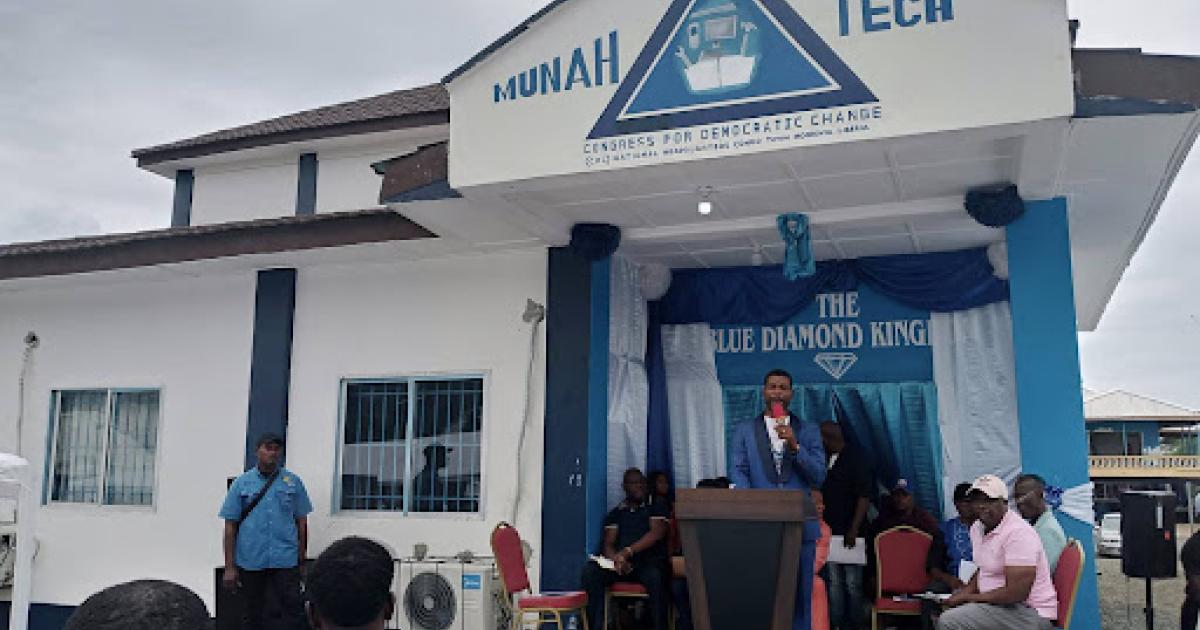 The ruling Coalition for Democratic Change (CDC) has dedicated its own self-funded professional and technical institution to help support the Liberian government’s efforts in preparing young people for the job market.

Located at CDC party headquarters in Monrovia, the vocational school was recently dedicated and named after one of the party stalwarts, the late Munah Pelham Youngblood, former Montserrado County Representative.

Youngblood, the youngest member of the Liberian Legislative Assembly, has twice been elected as the representative for District 9 of Montserrado. She was a representative from 2011 to 2020, the year of her disappearance. Although it is common for Liberian politicians as individuals to erect schools and guarantee scholarships for their constituents, this may be the first time in Liberian history that a political party has built a professional institution.

Deputy Speaker of the House of Representatives, Cllr. Jonathan Fonati Koffa, who was a guest speaker at the dedication program, described the CDC as the youngest liberation movement in the history of Africa, while paying tribute to President George M. Weah, the visionary of the left.

Vice President Koffa affirmed that the establishment of professional and technical studies is the first in the history of political parties in Liberia.

“Never in the history of a political party has an institution dreamed of saying that we’re not just going to build supporters to say A-woo dire! (battle cry), or to come and see the leaders for alms, but we want to build supporters who are also empowered – to be able to fend for themselves so that they’re not just given, but can give back to the institution. political history that we are talking about. I challenge and challenge anyone to come here with an example that is also in Liberia,” Koffa said.

The vice president, who is now a ruling CDC official, was once the chairman of the Freedom Party and briefly courted the former ruling Unity Party. He said that in all his political life, he had never seen such a significant project undertaken by a political party in Liberia.

He attributed the party’s landmark achievement to the selfless efforts of the party’s “young revolutionaries” who made the ultimate sacrifice over the years.

“We have been in political institutions,” he said. “We tried to build a political party. We have never seen anything like this happening here today. We give all the praise to young revolutionaries and emerging leaders. We have all seen their struggles, the sacrifices they have made. They should have done something to improve their lives, but they put their lives on the line to get us here.

He called on students to seize the opportunity for a better future and pledged his unwavering support to the institution.

The event was graced by senior officials, including lawmakers and guests. South Africa’s Ambassador to Liberia, Professor Iqbal Jhazbhay also graced the occasion, which revealed that discussions were underway with the Vice-Chancellor of the University of South Africa to support the new professional institution.

According to Prof. Jhazbhay, the Chancellor has agreed on behalf of the University to form a partnership with ‘Munah Tech’ for the benefit of students in digital and professional disciplines.

He then recounted the long-standing relationship between Liberia and South Africa; in particular the extensive support that Liberia extended to the leaders of the anti-apartheid movement and the African National Congress (ANC) during their liberation struggle.

Meanwhile, Party Chairman Mulbah K. Morlu thanked President Weah for his vision and the supporters for supporting the project through payment of dues and donations.

“It’s the product of the sweat and dues-paying ability of party members. It is the professional party institution of which you can be proud. Thank you to all supporters for their contributions – CDC USA, Europe and Australia.”

He said that although the school belongs to the Party, it will open its doors to all Liberians, regardless of their affiliations. According to him, Munah Tech will be “completely free” for the many young supporters who aspire to professional skills.

He thanked the South African Ambassador to Liberia for soliciting support on behalf of the vocational school and expressed hope that the proposed partnership will benefit the students. He noted that the CDC’s founding fathers were inspired by the ANC’s fight for freedom.

“You (ANC) are the inspiration that gave birth to us (CDC) to provide basic social services and economic freedom to our people and our country. We are honored to have you seated here less than 100 feet from our sycamore, which recalls the history and the sacrifice of all the revolutionaries who left and who are still alive. We say thank you for being there. We hope that the institution will do everything possible to work with the school said President Morlu, addressing the Ambassador.