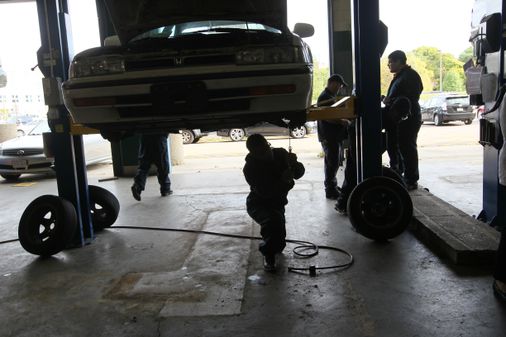 “We believe the admissions policy is a serious and pervasive violation of civil rights that must be addressed at the state level,” said Gladys Vega, executive director of the non-profit La Colaborativa in Chelsea, during a press conference held on Zoom. Without policy change, she added, “Generational poverty. . . will repeat itself over and over again for decades to come in our society.

When deciding whether or not to admit students to ninth grade, the state’s dozens of regional vocational and technical schools consider grades, attendance, and disciplinary history. The coalition said these factors are subjective and unfair because they relate to race, class, language skills and disability status.

A recent state analysis of waitlist data appears to reflect the coalition’s concerns. It showed large disparities in acceptance rates at professional technology schools, with students of color, low-income students, students with disabilities, and English learners being much less likely to be offered admission. .

The analysis showed that voc-tech schools admitted only half of the English learners who applied, while 70 percent of fluent English speakers were admitted. Only 60 percent of applicants of color got places, compared to 73 percent of white applicants.

The policies “have excluded people from these incredible engines of opportunity,” said State Senator Eric Lesser, who represents Springfield and Chicopee. The losers, he added, are “frankly the populations most in need and the most deserving of this type of lifeline.”

Coalition advocates said vocational school administrators were looking to boost their schools’ MCAS scores by choosing students with higher grades in an effort to boost their reputation as high-quality schools. The state, they said, must intervene.

“The failure of the state school board to take action to end racial discrimination is of great concern,” said Juan Cofield, president of the NAACP New England conference.

The policies go against many provisions in state and federal laws that prohibit discrimination based on race, class, language and disability status, said Paul Weckstein, co-director of the Boston-based Center for Law and Education.

Critics say voc-techs have become selective schools for wealthy, college-bound students who would be fine in a regular high school. Many students interested in the trades but with less impressive academic records often wade through regular high schools and end up dropping out, they say.

Kevin Farr, executive director of the Massachusetts Association of Vocational Administrators, said schools were just following state rules and wanted the process to be fair.

“These are criteria developed by the state,” Farr said. “We do a lot of self-reflection when it comes to these different categories and different criteria. . . . It’s the most important thing on our plate right now.

Commissioner Jeff Riley plans to announce his recommendation on whether to change admission policies to vocational schools in April, and the state council for elementary and secondary education will vote on whether to send the proposal for public comment for about two months before a final vote in June. .

“What we’re looking for, at the end of the day, is to try to be as fair and equitable as possible about admissions,” Riley said at a board meeting on Feb. 22.

At this meeting, national education officials presented data on admissions to vocational schools they collected this year for the first time. The department analyzed 58 vocational schools which had 18,560 candidates vying for 10,600 ninth grade seats. All schools use selective criteria, which include grades, attendance, disciplinary records, guidance from a guidance counselor, and an optional interview.

Statewide data showed disparities at every step of the admissions process. Officials said they saw an “awareness gap” showing lower application rates among certain groups of students, including black and Latino students and English learners. Only 37% of the applicants were students of color, although they represented 43% of ninth graders statewide.

State officials questioned whether schools are translating application documents correctly or making sure these students are familiar with the programs. Of all student groups, English learners had the highest acceptance rates for places when offered to them, indicating that they really wanted to attend these schools, officials said.

Coalition advocates said they believed the gaps were not only in awareness, but also because students felt applying was a waste of time as they were unlikely to get a place, taking into account the selective criteria.

At the February meeting, some board members signaled their desire to change the system. Darlene Lombos said the criteria used for admissions could be biased against disadvantaged students; for example, she said, low-income students may not have the best attendance if they have moved due to housing instability.

At Thursday’s press conference, representatives from the construction industry said the state was short of trades workers, resulting in months of delays and higher labor costs for homeowners doing renovations.

The admissions policy “is definitely discrimination, and it’s horrible, but on top of that it hurts our economy,” said Nina Hackel, owner of home renovator Dream Kitchens. “I don’t have entrepreneurs under 50. I don’t even have people of color applying.”

Only 9% of the more than 1,000 apprentice carpenters currently in Massachusetts have attended vocational technology schools, said Tom Fischer, executive director of the North Atlantic States Carpenters Training Fund, which manages the apprenticeships. That means most carpenters come to work in their late twenties and have missed out on years of earning $ 50,000 to $ 80,000 a year with no college debt, he said.

“There’s no correlation between your math, science, English, and history scores and your success as a carpenter,” Fischer said; what matters, he said, is “the passion to be a carpenter.”

Naomi Martin can be reached at [email protected]