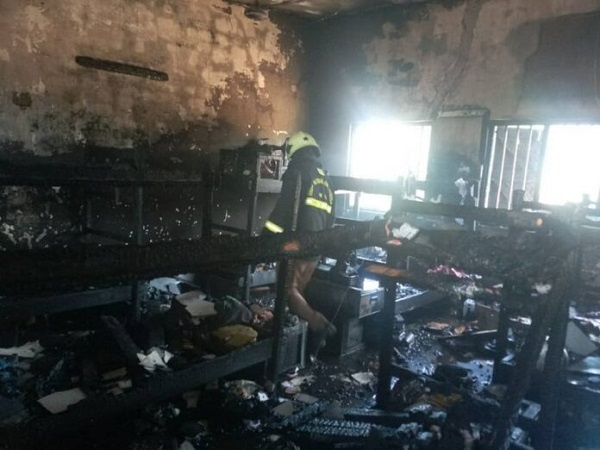 A photo of the dormitory destroyed by fire

Fire swept through a 3-unit dormitory block at the Social Welfare Girls Vocational Training Center in Pedu in the Northern Cape Coast district of the Central Region on Thursday evening.

A student who reportedly slept in one of the bedrooms passed out as she tried to escape hell and was sent to Cape Coast University Hospital for treatment.

It is unclear what caused the fire which destroyed items like sewing machines, gas cylinders, electric irons, textbooks and uniforms.

According to the students, the fire occurred while most of them were studying in the classrooms.

It took firefighters a long time to bring the blaze under control.

Students had to sleep in classrooms and dining halls with rented mattresses.

Cape Coast Metro NADMO Director, Mr Stephen Foli assured the students that his outfit will do everything possible to make them feel comfortable.

Meanwhile, some teachers in an interview with Kasapa News Yaw Boagyan appealed to the Cape Coast Metropolitan Assembly to remove all the shops that surrounded the school making the entrance narrow.

According to them, firefighters had difficulty entering the school to fight the blaze due to the narrow entrance created by the disorderly placement of container stores.

Today in history: ISD receives news that vocational school has been approved | New