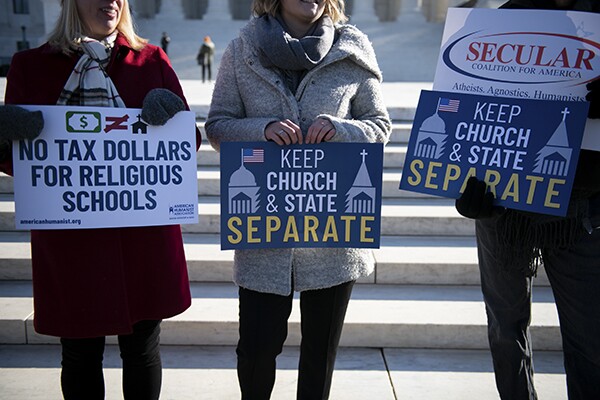 The U.S. Supreme Court heard an intense hour of argument Wednesday in one of the most important K-12 education cases in years, with conservative justices suggesting they were inclined to rule for parents who are seeking to reinstate a Montana tax credit to fund scholarships to be used for religious purposes. schools.

“Why doesn’t this exclude religious people, telling them they don’t have a right to equal treatment under the Constitution,” Judge Brett M. Kavanaugh said as he heard arguments over Espinoza v. Montana Department of Revenue (Case No. 18-1195). “Why isn’t this an outright violation of the Lutheran Trinity principle?”

Kavanaugh referenced a 2017 decision, Trinity Lutheran Church of Columbia v. Arriving, before joining the court. The court ruled 7-2 in that case that Missouri violated the U.S. Constitution’s guarantee of free exercise of religion by denying a church participation in a state program to improve playground safety.

Chief Justice John G. Roberts Jr. — present and heartbreaking despite his marathon session on Tuesday presiding over President Donald Trump’s impeachment trial in the U.S. Senate — also expressed support for the idea that any discrimination based on religion would violate the First Amendment.

Judge Samuel A. Alito Jr. suggested that states “do not have to fund private education at all, but if they choose to provide scholarships to students attending private schools, they cannot discriminate parents who want to send their children to schools that are somehow affiliated with a church.

Judge Neil M. Gorsuch also suggested supporting the parents’ side, while Judge Clarence Thomas, who did not speak as usual, has long held the view that state constitutional amendments banning aid to religion are suspect under the US Constitution.

But several liberal members of the court questioned whether there was still a valid case because Montana’s entire tax credit program had been canceled, so no scholarships were given to religious private schools. or secular.

“There’s no discrimination going on at this point, is there?” said Judge Elena Kagan. “Whether you go to a religious school or a secular private school, you’re in the same boat at this point.”

“If the court had shut down the program because it included Muslim schools or African American schools, there’s no question that would be unconstitutional,” Komer said.

Adam G. Unikowsky, a Washington attorney representing the state, told the justices that the U.S. Constitution “does not prohibit the State of Montana from enacting and enforcing any constitutional provision of the state that precludes its own state legislature from funding religious schools“. .”

“The no-help clause does not prohibit anyone from the free exercise of their religion,” Unikowsky said. “Rather, it protects religious freedom by shielding religious schools from government influence and ensuring that government cannot use aid as leverage to influence the content of religious education.”

Among those in the courtroom was US Secretary of Education Betsy DeVos, who has long been a proponent of various forms of private school choice. The Trump administration has joined the arguments on the side of parents of religious students.

When the court said in Lutheran Trinity that “you may not deny a generally available public benefit to an entity that otherwise qualifies solely on the basis of its religious character or nature, this rule applies the same to schools as it does to playgrounds “said Jeffrey B. Wall, the senior U.S. Deputy Solicitor General. .

The Montana case involves a $150 state tax credit for contributions to funds that provide scholarships for students to attend private schools, including religious schools. (Education Week previewed the case during a visit to Montana and a discussion of history non-state aid to religion clauses.)

The state revenue department, which administers the tax credit, issued an administrative rule prohibiting the use of scholarships at religious schools. He cited a state constitutional provision which states that the state “shall not make any direct or indirect appropriation or payment out of public funds or money … for sectarian purposes or to assist any church, school , an academy, seminary, college, university, or other literary or scientific institution, controlled in whole or in part by a church, sect, or denomination.

Montana is among 38 states that do not have religion help language in their state constitutions. Some call these measures “baby Blaine amendments” after the federal Blaine Amendment, introduced in Congress in 1875 by James G. Blaine, then a member of the Maine House of Representatives. The amendment would have made the Establishment Clause of the federal constitution applicable to the states and declared that no state tax money “shall ever be under the control of any religious sect.”

Although the federal measure failed, more than 20 states have subsequently passed state constitutional measures that in one form or another prohibit government assistance to religious denominations and religious schools.

Montana’s rule limiting scholarships to secular private schools has been challenged as a violation of the free exercise clause of the U.S. Constitution by parents who sought to use scholarships at religious schools.

The Montana Supreme Court in 2018 struck down the entire tax credit program, for religious and non-religious schools, based on the state’s constitutional provision. But he suspended his ruling and the money from scholarship contributors claiming the tax credit in the 2018 tax year is being used by a private organization to provide $500 scholarships to about 40 families this school year.

Among those who received the scholarships were Kendra Espinoza and her daughters Naomi and Sarah; and Jeri Anderson and her daughter, Emma. Both families were in the courtroom on Wednesday.

Also present were two groups of Catholic school children and school choice advocates, including Jeanne Allen, president of the Center for Education Reform. On the other side, teachers’ union officials and supporters of a strict separation of church and state also listened to the arguments.

Arguments ranged from the era around the nation’s founding, to the anti-Catholic backlash against immigrants in the mid-19th century, to the 1972 Montana Constitutional Convention, which readopted the state’s constitutional provision barring the helping religion.

“We have a founding father, [James] Madison, pushing for the free exercise clause and also to prevent states from establishing religions or using public funds to support them,” Judge Sonia Sotomayor said, adding that Montana in its 1972 convention n was not motivated by anti-Catholic prejudice but “decided that they were going to side with James Madison, one of the fathers of our Constitution, and continue to say that we don’t want any help from the churches.

Kavanaugh suggested that 19th century state non-aid provisions were rooted in “grotesque religious bigotry against Catholics. … That was the obvious motivation for it.

Unikowsky said that while there was such bigotry at the time of the original Montana state constitution, “in the 1972 Constitution, where this provision was enacted, I don’t think it there is the slightest evidence of anti-religious bigotry”.

A decision in the case is expected by the end of June.

First image: Protesters from the American Humanist Association demonstrate against the use of public money to fund religious school attendance before the start of court proceedings in the case of Espinoza v. Montana Department of Revenue to the United States Supreme Court. (Graeme Sloan/Education Week)