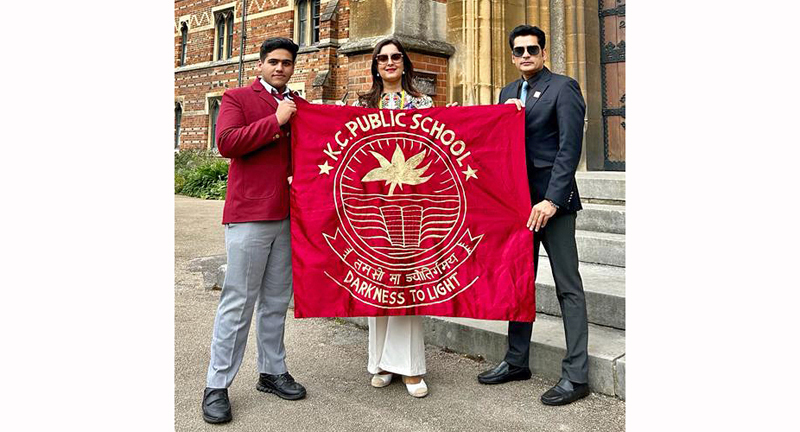 Excelsior Correspondent
JAMMU, September 26: After a 2-year hiatus, the 53rd Round Square International Conference 2022 (RSIC-22) was held at the University of Oxford in England.
It was one of the largest conferences with more than 1500 delegates from all over the world gathered in the haloed premises of Oxford.
Arti Chowdhary, Managing Director of KCPS, Ambedkar Gupta as adult delegate and Samyagya Chopra from Class XII as student delegate represented KC Public School at this gigantic gathering.
While at Oxford, students heard from world-renowned speakers on topics related to the conference theme “Take Less, Be More” which led them to barazza discussions in mixed nationality groups to build international understanding and a spirit of cooperation. The keynote address on “Sustainable Economics” by Dieter Helm, Professor of Economics at the University of Oxford and Research Fellow in Economics at New College, Oxford was very well received. Barazza talks by student delegates, cultural programs from participating schools, scavenger hunts, and various other creative and theatrical activities, including a literary adventure run and Ceilidh folk dances, kept the spirit of camaraderie alive.
The delegation stayed at Keble College, one of the largest colleges of the University of Oxford established in 1870.
During the 2nd half of the conference, KC Public School delegates moved to Ryde School with Upper China on the Isle of Wight in the south of mainland England and took part in field trips. adventure and sightseeing tours and hikes to historic Osborne House and several coastal sites. such as the Needles, Freshwater Bay and the iconic Alum Bay where they practiced water activities such as rafting, kayaking, paddleboarding and surfing.
Round Square CEO Rachael Westgarth and other team members appreciated the work done by KCeans and for absorbing the true spirit of Round Square’s ideals of adventure, environmentalism, leadership and service. She praised Chief Executive Arti Chowdhary’s podcast speech on “Fostering Youth Leaders for a Happy World”.
The conference offered KCPS delegates the opportunity to experience internationalism and diversity, gain insight into global environmental and energy issues, and build friendships with peers from around the world. whole world.