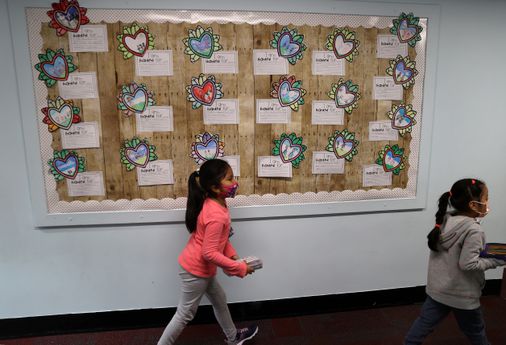 Peak of school cases: Mass. reports 8,513 new cases of coronavirus among public school students and 1,396 among staff in the past two weeks

Reported cases among public school students and staff members are still expected to increase with cases in the general population, and the increase in cases in schools is not necessarily correlated with the spread of the coronavirus in school buildings, Lantagne said.

About 920,000 students across the state attend school in person, and about 140,000 staff are inside school buildings. From November 18 to December 1, approximately 0.93% of students and 1 percent of staff have reported positive cases of coronavirus to their principals.

This represents an increase of 0.35% of students and 0.4% of staff who tested positive from November 11 to 17. Thursday’s report consolidated two weeks of data – about seven to eight days for most schools, depending on the district, due to the Thanksgiving recess.

Weekly reports of coronavirus cases in schools have been higher this school year than at any time in the previous school year. Many more students are attending school in person this year than last year, and more than double the number of schools have signed up to participate in state-provided COVID-19 testing services.

About 1,000 schools participated last year, compared to over 2,200 who registered to participate this year. It is not known how many schools are actively participating in the testing programs, but 1,947 reported testing data for the two-week period that ended on Sunday.

For the two weeks that ended Sunday, 35,357 pooled tests were processed, with a pool positivity rate of 1.99%. In the test-and-stay program, which tests students and staff who were in close contact with people who tested positive for the virus, 67,154 tests were performed and 66,465 tests came back negative.

Massachusetts school districts are required to report positive cases among students and employees to the state, although the reports do not indicate how many people were inside school buildings. Local school leaders are encouraged to report any cases among enrolled students or employed staff, whether or not they have been in school since testing positive.

The reported cases among students and staff also do not indicate that transmission at school has occurred, or that there was a cluster of cases, which is defined by the public health department of state as two or more confirmed Massachusetts cases with common exposure. From October 31 to November 27, there were 104 clusters in public, private, specialty, and boarding schools in Massachusetts.

Experts have also repeatedly pointed out that even though many children are not vaccinated, COVID-19 does not cause serious illness for most of the children who contract it. From November 14 to 27, 35 people under the age of 20 in Massachusetts were hospitalized, and no one in this age group died.

Safdar Medina, pediatric director of the Tri-River Family Health Center in Uxbridge and professor at the University of Massachusetts Chan School of Medicine, said the best thing families can do to continue to prevent transmission at school is to wear a mask, get vaccinated, and stay home when you feel sick.

Despite the new Omicron variant dominating the headlines, Lantagne said the “high probability” is that cases reported in schools are still due to the Delta variant, the dominant strain in Massachusetts. Even as cases continue to rise next week, she said, it is important that education officials wait to learn more about the Omicron variant before making any drastic changes to schools.

“It’s incredibly difficult, but we know very little about transmissibility, virulence or vaccine escape [with Omicron], and we won’t know for another two weeks, â€she said. “We have to be patient until this data arrives before we make any decisions going forward.”