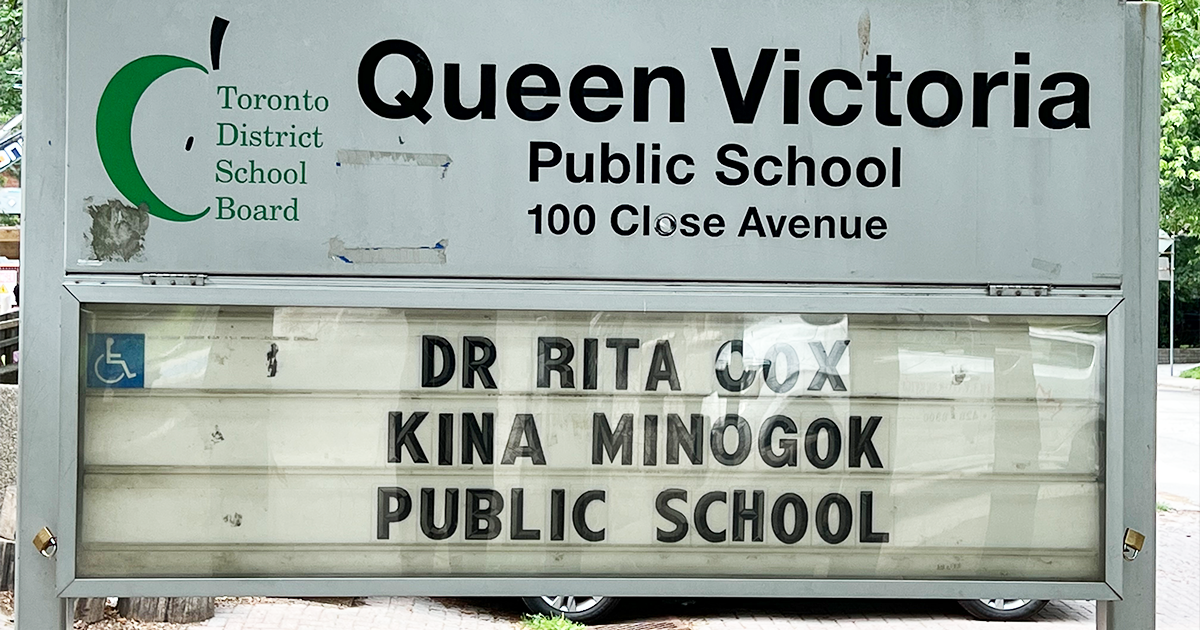 The name of a public school in Parkdale was changed towards the end of June from Queen Victoria to Dr. Rita Cox-Kina Minogok public school.

The change came without fanfare, likely considering the outrage of many at the prospect of canceling the story when the project was first announced in May 2021.

Since its founding in 1887, the school has been dedicated to the memory of Queen Victoria, who reigned on the British throne for 63 years.

That was until June, when Toronto District School Board (TDSB) officials, in conjunction with the Queen Victoria Renaming Committee, decided to give her an arduous two-way name that honors both the black and indigenous communities.

Dr. Rita Cox was a longtime librarian in the same west Toronto neighborhood as the school, as well as a black activist and children’s storyteller.

The Kina Minogok part of this absurdly long name is an Aboriginal term meaning “everything grows well.”

After retiring from the Toronto Public Library in 1995, Cox was named a Member of the Order of Canada in 1997 for her storytelling work and received honorary doctorates from Wilfred Laurier and York universities.

Although she refers to herself as Dr. Rita Cox, nothing in the stories or biographies about her indicates that she completed a doctoral program at a university in Ontario or outside of Canada.

A Black and Caribbean library collection and endowment fund are named after him, as well as a Toronto park near Lamport Stadium.

The decision to change the name of the 700-student school took root in 2020 when a TDSB Black Student Success Committee decided to advocate against “colonialism”.

The movement gained momentum in 2021 when parents raised several allegations of “anti-black racism” and “systemic discrimination” at school.

In a May 19, 2021 report to the TDSB, the Black Student Success Committee claimed that the Queen Victoria school community had faced “devastating challenges” in the previous year – including action by the Federation of Teachers and Teachers. Ontario elementary teachers, “continued experiences of anti-Black racism” and the pandemic.

Rebranding the school, they said, would be a “fresh start”.

The 2021 report – authored by woke bureaucrats Andrew Gold and Debbie Donsky – also suggested that a group of TDSB educators involved in ‘anti-racism’ work be created to look into the possibility of reviewing all the names of schools to reflect the diversity of Toronto.

Fast forward to 2022 when some 150 new names for Queen Victoria School were shortlisted to five, including Martin Luther King Jr. and Michelle Obama.

The chosen name was accompanied by a 14-page report to administrators dated June 22 on how officials are tackling “anti-Black racism and hatred” in the new public school community Dr. Rita Cox-Kina Minogok .

The report was written by nine senior officials, including Gold and Donsky – who were no doubt trying to get a gold star from black activist board director Colleen Russell-Rawlins for tackling what they described as “dehumanizing acts of anti-black racism.”

They provided no details in the June 22 report or last year’s report on the exact nature of these “dehumanizing acts.”

Nonetheless, the report states that the school’s student leadership team conducted “specific learning about the adverse effects of colonization and monarchy.”

They also learned about “identity and oppression” (code for Critical Race Theory.)

The report says that following an incident of “anti-black racism” at nearby Parkdale Collegiate involving a black face, focus groups and student climate surveys were undertaken to improve programming.

On October 29 last year, a Grade 9 teacher came to school dressed in blackface to commemorate Halloween. Teacher was sent home and fired faster than he could tell Justin Trudeau dressed the same.

Russell-Rawlins issued a lengthy statement of apology days after the incident.

They are asked to engage in the study of books such as me and white supremacy and Become a Good Ancestor.

This report certainly provides up-to-date insight into the selective treatment of black students at the TDSB by a director of education who cares more about black activism than academic excellence.

The undoing of Queen Victoria and an important chapter in Canadian history is bad enough.

But the idea that more schools could be renamed and that nine bureaucrats devoted so much time and so many resources to addressing Russell-Rawlins’ skewed worldview is downright obscene.

Sue-Ann Levy, a two-time Investigative Reporting Award winner and nine-time Toronto Sun Readers’ Choice Award winner for news writing, has made a name for herself advocating for the poor, homeless , seniors in long-term care and other voiceless people and for fighting against soaring anti-Semitism and the BDS movement across Canada.

We ask readers, like you, to make a contribution to support the factual and independent journalism of True North.

Unlike mainstream media, True North does not get a government bailout. Instead, we depend on the generosity of Canadians like you.

How can a media be trusted to remain neutral and fair if it receives government assistance? We don’t think they can.

This is why independent media in Canada is more important than ever. If you can, please make a tax-deductible donation to True North today. Thanks a lot.