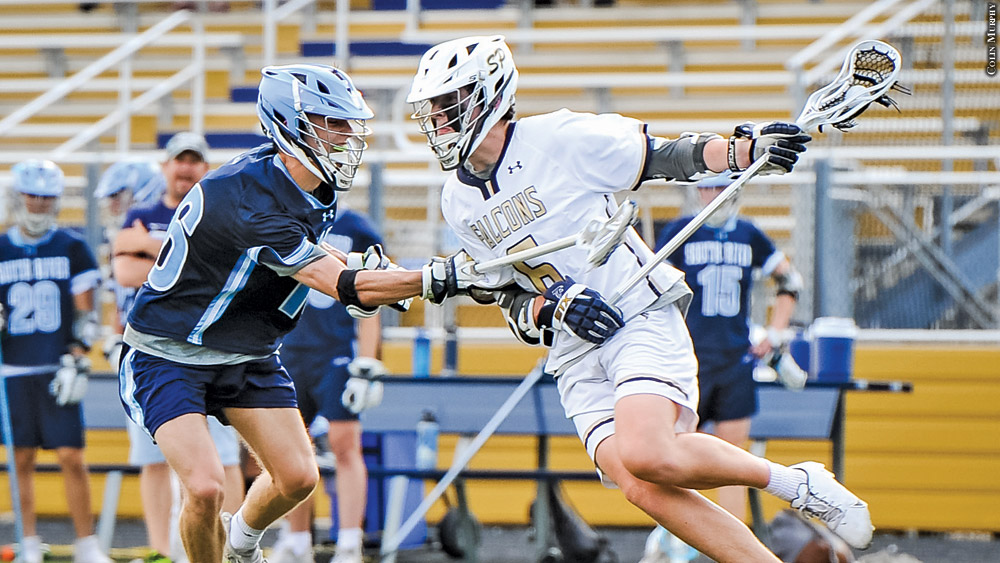 “I knew I would be good enough to coach a school where I could go for free and play with all my friends,” said Thomas, who is preparing for his senior season as a forward for UMBC. “I didn’t have to go to a private school to coach high-level lacrosse. It was a pretty easy decision.

Joaquin Villagomez is a senior at Severna Park and never considered playing anywhere else.

“Why would I when I have Severna Park right on my doorstep?” said the talented forward and Towson University rookie.

While many of the top high school lacrosse players end up going to a private school for what they perceive to be better competition and an overall better experience, Severna Park offers a comparable experience that many consider equally appealing.

The Falcons have a rich history of success with 14 state championships in women’s lacrosse and 10 in men’s lacrosse, including the last five in MPSSAA Class 4A.

Since the school was rebuilt and reopened in 2017, its sports facilities, which include two grass pitches and a top-notch weight room, rival those of many colleges.

Plus, as Dave Earl, the coach and architect of the recent resurgence of the boys’ program, pointed out, attendance is free.

“It certainly helps,” he said.

Severna Park isn’t keeping all of its district’s top players away from private schools. Earl said one of Maryland’s top forwards could play for the Falcons, but opted to go to McDonogh instead.

Still, Severna Park’s academic reputation, coupled with its long track record of on-court success, makes many players feel like they’re not missing out on going the public school route.

“Kids come to school to play sports, obviously,” Earl said. “But at the end of the day, I think mom and dad want their kids to get the best education possible, and Severna Park delivers that.”

When Earl took over the boys’ program in June 2014, the Falcons had fallen into a rut. They hadn’t won a state title in four years, an eternity by their standards, and finished 6-9 the previous season.

Their stadium had been demolished to make way for the new school, and games and practices were taking place across town at Kinder Farm Park, requiring players to travel back and forth by bus.

A year into the playoffs, Earl said his starting puck specialist and best midfielder weren’t available until halftime due to advanced placement tests at school.

“Now if that were to happen, we’d have leeway and say, ‘Hey, we have to push that game time back,'” he said. “But that wasn’t possible when we were playing at Kinder Farm Park.”

For someone who enjoys helping programs get back on their feet, Earl was energized by the challenge of taking over at Severna Park.

Prior to arriving, he spent two years as head coach at Anne Arundel Community College, where he transformed the Pioneers from a floundering program with 13 roster players into a 14-7 final team in the National Junior College Athletic Association. Earl was named NJCAA Coach of the Year in 2014.

The situation was not so desperate when he arrived at Severna Park.

“All the pieces were in place,” Earl said. “They just needed someone to put them together the right way.”

Earl immediately set up an offseason program that ran from September until the start of the season in mid-March.

Players were not discouraged from participating in other sports. Instead, they could come in at their convenience and work out in the weight room or perform conditioning and agility drills on the field until they were able to use the actual lacrosse equipment. with the official start of spring training.

All the while, the players were getting more individualized coaching as they worked in small groups. The extra work they did in the offseason months made them better players and brought them closer together. Older players were paired with younger players during training to foster a family environment.

“It’s awesome,” Villagomez said. “We know we have a goal on our backs every season. So everyone pushes everyone to their potential. This is why we are able to produce such good results.

“All the younger kids see the work done by the older kids, and that’s how it keeps happening over and over again.”

When interviewing for the job, Earl told Severna Park manager Patrick Bathras that he wanted a period of study. Bathras assured him that it would not be necessary.

Once the season started and Earl looked at the team’s GPA, he noticed it was 3.7.

“I went, ‘Wow!'” he said. “These kids are smart, they’re motivated and they want to play. They also study and do what is necessary to succeed at the next level.

In other words, he had come to the right place to train. Earl knew it wouldn’t be long before they were playing at the top level again.

“I hate to use the old cliche, ‘Drink the Kool-Aid,'” he said. “We wanted players and parents who wanted to work hard, who wanted to win and who wanted to be better people. This has been our main objective. If we get there, the wins are just the icing on the cake, so to speak.