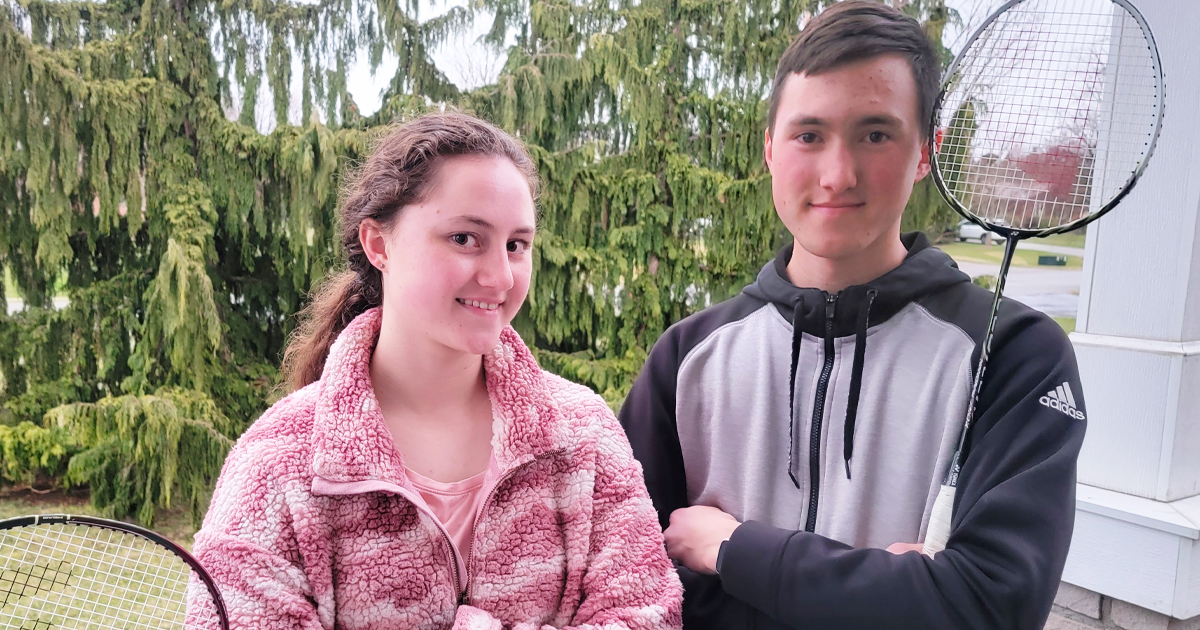 Two Ontario high school students who chose not to get the COVID shot have been banned from a tournament hosted by the University of Waterloo, and two vaccinated students are expected to take their place.

In an interview with True North, Josiah and Chloe-Ann Kranenburg said they were told they could not participate in their school’s regional tournament on April 20 because the university is sticking to its no-show policy. vaccination despite the lifting of vaccine passports by the government on March 20. 1.

The Kranenburgs, who are siblings, attend Brantford Collegiate Institute and Vocational School and compete in mixed doubles badminton. Their school district‘s regional tournament, hosted by the West Central Ontario Secondary Schools Association (CWOSSA), is hosted by the University of Waterloo.

Josiah said it was his coach who broke the news, first telling him on March 29 that he would need to be vaccinated to compete, then telling him later in the week that a vaccinated player would replace him. .

Chloe-Ann told True North that she first heard about the issue in the locker room from her badminton partner.

When asked if his coach and administration were working to improve the situation for the siblings, Josiah said that “(h)e did the best that I think he could have done.”

“The coaches really couldn’t do much,” added Chloe-Ann.

They added that a CWOSSA organizer also tried to help.

None of the Kranenburg coaches wanted to be named, and neither CWOSSA nor the University of Waterloo responded to True North’s request for comment.

True North was, however, able to obtain correspondence from the University of Waterloo sent on this matter.

“Acting on the advice of public health experts, government instructions as well as legislation, and rooted in various relevant university policies, the University of Waterloo requires all students, employees and visitors to provide proof that they are vaccinated against COVID-19 in any indoor facility. such as the Columbia Icefield Gymnasium or the Field House,” the correspondence read.

“This requirement for proof of vaccination remains in place until May 1, 2022 as part of the University’s general health and safety requirements and in recognition of the continued role of vaccination as a key defense in the ongoing management of COVID-19.”

The University of Waterloo has a history of tough vaccination policies, recently laying off 49 employees for not being vaccinated.

The Kranenburgs said they chose not to get the COVID shot because they wanted to wait. Ontario schools have not required students to be vaccinated to attend.

“At first we weren’t sure, so we decided to wait and see if it was safe and effective,” Josiah said. “It’s been about a year since then, and we looked back, and realized it was probably a good choice not to have had the vaccine.”

Chloe-Ann talks about the social pressure to get vaccinated.

As of this writing, the badminton tournament remains at the University of Waterloo and the Kranenburgs have not been granted an exemption.

The brother and sister have asked that anyone wishing to help them can email the Waterloo Community Relations Department ([email protected]).

We ask readers, like you, to help support the factual and independent journalism of True North.

Unlike mainstream media, True North does not receive a government bailout. Instead, we depend on the generosity of Canadians like you.

How can a media be trusted to remain neutral and fair if it receives government assistance? We don’t think they can.

That’s why independent media in Canada is more important than ever. If you can, please make a tax-deductible donation to True North today. Thank you so much.